The automatic packaging line system can realize the functions of automatic box opening, product transportation, robot grabbing and box packing, and automatic box closing.
During production, the product comes from the front-end equipment and is in a disordered state. The product location information is detected by the camera and sent to the robot grasping system. The four robots are combined in twos, and each two is an assembly box; the automatic box opener will paper After the box is opened, it is transported by the conveyor line to the boxing place. The spider hand robot loads the product into the carton, and the carton after the product is transported to the automatic box sealing station for sealing, and then enters the downstream process after completion 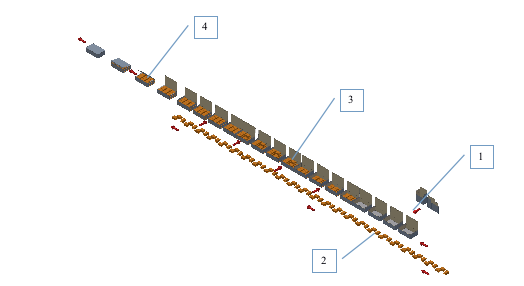 ①. Position 1 is a double-station cardboard forming machine. The cardboard is sucked down and the folded plate is opened to form. The X and Y-axis module mechanism will open the box and put it on the conveyor. The conveyor is conveyed by a mesh belt with a baffle, driving the carton at a uniform speed go ahead;
②. Position 2 is the product conveyor belt, and products are transported disorderly on the conveyor belt, and the location information needs to be detected by taking pictures with a camera;
③. There is a spider-hand robot at position 3, and the visual signal is given to the robot grabbing system. The robot grabs the product and packs it. Each robot grabs three products and packs it once; there are four robots in total, the first two as a group, Grabbing and boxing; the latter two are a group, and the other group of vision systems give signals to grab and box;
④. Position 4 is the carton after the product is packed. There are multiple stations on the closed box conveying. First, fold up the small folds on both sides, then fold the upper cover, and fold the upper cover at the same time Start, insert the carton, and finally press the upper cover tightly to complete the box sealing process. 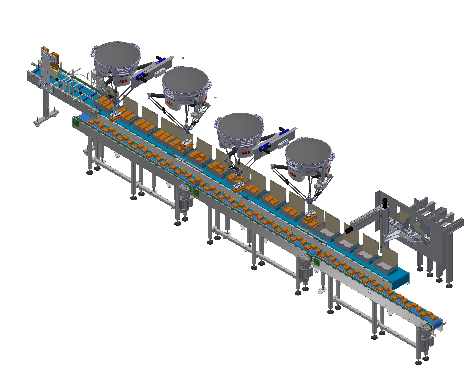 Box opening system: carbon steel welding frame, two storage bins, two sets of forming molds; the module drives the suction cup fixture to pick up the carton and move it in the X direction. The opened cartons are placed on the conveyor, and two cartons are opened at a time; the cylinder of the step-by-step feeding mechanism pushes the one-way bearing mechanism to transport the cartons in the storage bin forward, which is convenient for the fixture to suck; 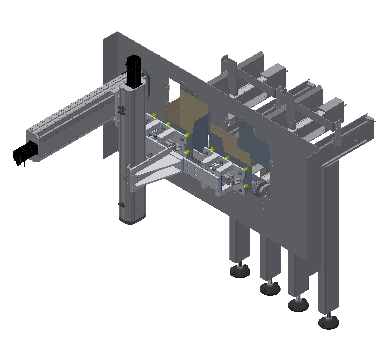 Robot cartoning system: The products are detected and positioned by the vision camera, the signal is transmitted to the robot system, the robot moves, and the fixture grasps three products at a time for cartoning. The robot brand ABB, IRB360 can grab 60 to 70 times per minute; This system requires a total of four robots, and two sets of visual inspection systems can meet production requirements; 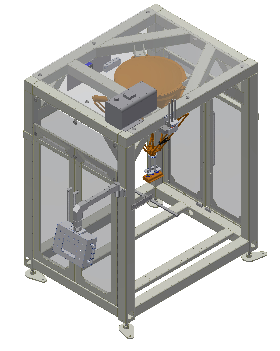 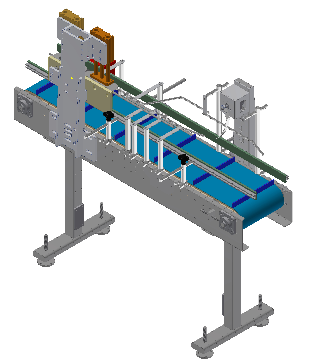 We are experienced packaging production line designers and manufacturers, if you have products that need packaging, we can provide design solutions